how much does health care contribute to health

I don’t know the answer.

Lots of different agendas contribute to health outcomes, we know this. Dalghren and Whitehead highlted it nearly 30 years ago, maybe more. The basics haven’t changed. 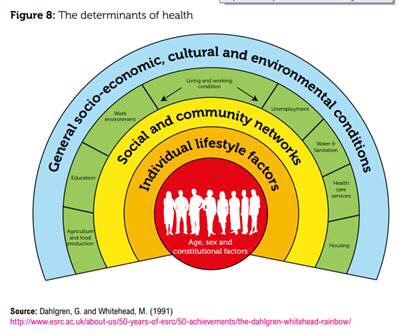 The relative contribution of different determinants

Debate continues to rage on the extent to which health care contributes to health outcomes.
The Health Foundation have been in thus space recently:

The Kings Fund are also there 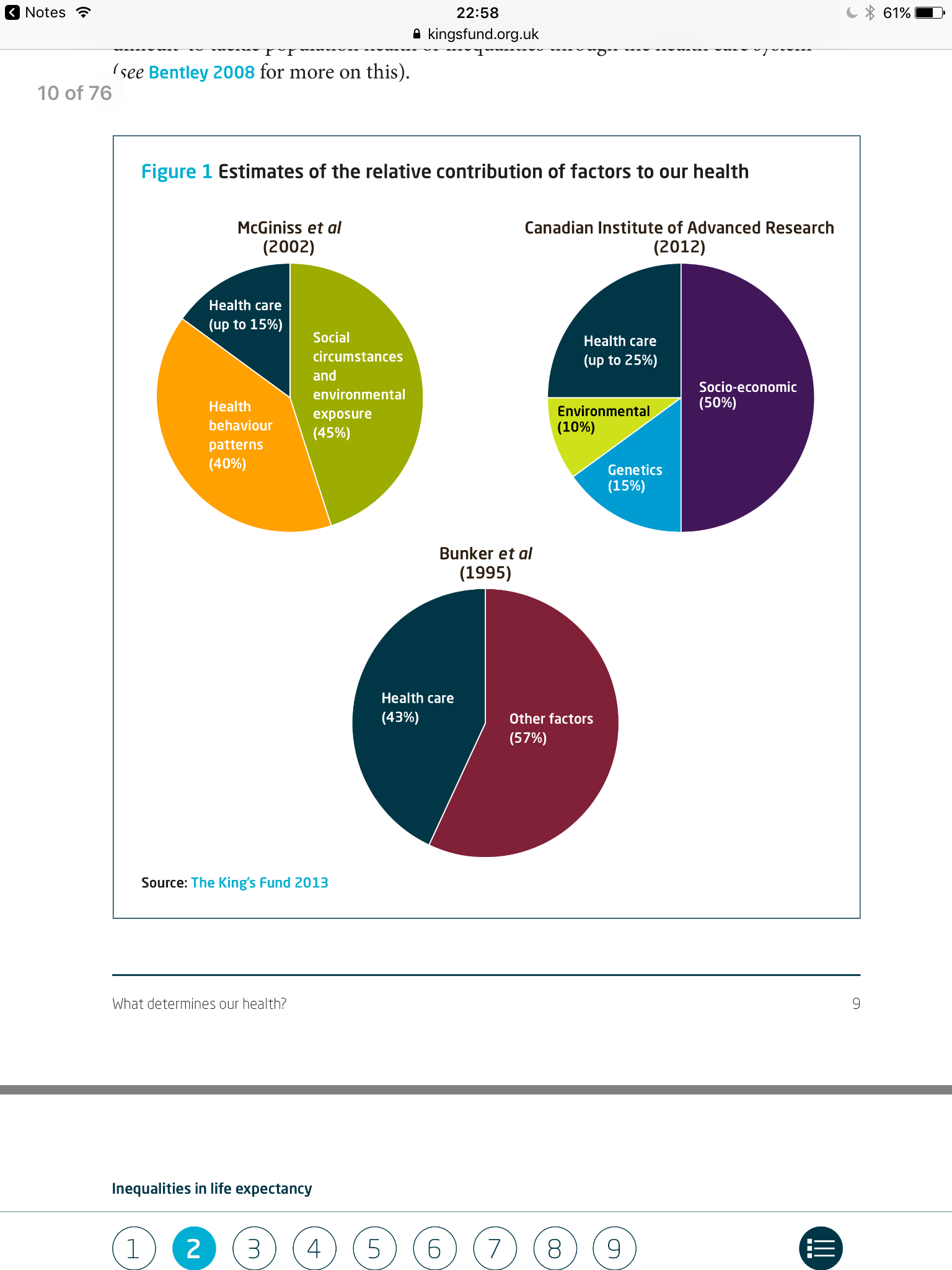 The best I’ve ever seen is the work done by RWJF, summarised here: 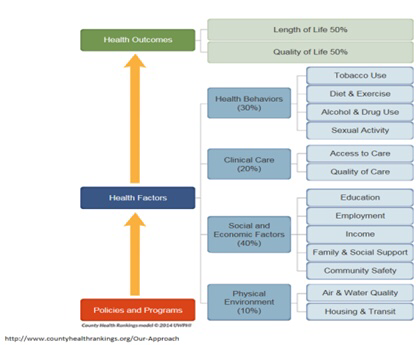 This study finds that between 1900 – 1999, life expec at birth increased from 47 years to 77 years. 25 of the 30 years gained can be attributed to PH advances. The aggregate effect of medical care on life expectancy is found to be roughly five years during this century, with a further potential of two years.

The Caveat re medical care is re alleviation of the enormous burden of pain, suffering, and dysfunction that afflicts the population for which medical care can provide a large measure of relief. See this blog also, and this interesting and useful blog on the quantification of the importance of healthcare for population health.

I’ve also written other stuff on this – The flat of the curve. Do you want more health, or health care and How can we measure how much the NHS is contributing to lifespan

Does it matter. Maybe, maybe not
My previous view was as follows:

On this last point, see Krieger – there’s some very tricky to handle messages in here, the methodological stuff in the Global Burden of Disease referenced here (the maths is in the appendix) and here – the methodology paper describing how they incorporate Comparative Risk Assessment (CRA) to figure out attributable deaths, DALYs, exposures etc. This has been built on as the GBD study has grown, but the method is basically unchanged as far as I can see.

You quickly get into a discussion on methodology for competing risk epidemiology. Anyone up for it? No I thought not. And that’s with simple neat, clean defined risk like smoking , blood pressure – not complex messy stuff like housing or poverty.

thanks to @drchrisgibbons for nuggets of wisdom

Why it DOES matter….. 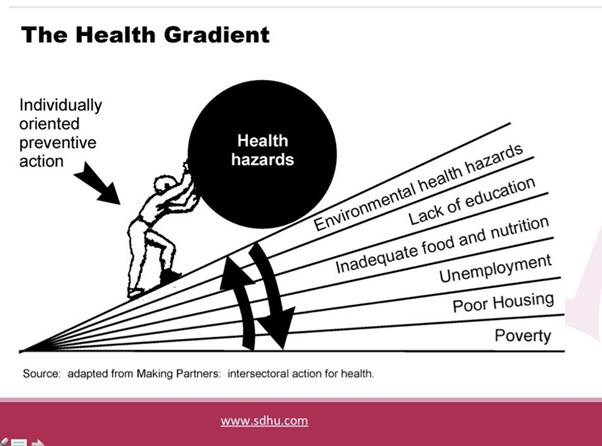 That would be a tricky diagram indeed, but may significantly steepen the hill for some and make it shallower for others, and determine how strongly individuals needed to push etc.

This picture and this picture alone underscores the point about the need to focus on communities, populations and toxic environments and give this primacy over services that help individuals

And doesn’t it depend how steep the hill, how big the ball, and how strong the push? That all varies over time/case. ‘Very often’ not always?

I’m firmly of the view that the allocative split of resource within the health care system is not in keeping with our stated goal – healthier folk etc.

The implication is an investment in social care, mental health and primary care, at the expense of other investments.

If we want more health, we may need to shift our profile of investments away from health care towards other social investments that are more closely related to health outcomes.

‘We know, however, that healthcare has only a small effect on length of life and that its benefit is on quality of life. But attempts at aggregating health benefit show a similar graph to that for life expectancy—at a fairly low point further expenditure produces little benefit. What is sure is that the extra value produced by further expenditure becomes smaller and smaller, meaning that hard-hearted economists (and even rational soft-hearted ones) would spend the money on something else—housing, environment, education, the arts—where extra spending would produce unquestionable and easily measured benefit.

In fact, in many places increased spending on health is “crowding out” expenditure on other areas. Don Berwick, a paediatrician who recently ran for governor in Massachusetts, shared a graph at the World Innovation Summit for Health in Doha that showed that state expenditure on health had increased considerably while expenditure on everything else had gone down.

Worse than flat of the curve healthcare is the point where more spending means worse outcomes. Enthoven thought that he saw this in areas like coronary bypass surgery where people may be given operations that they don’t need with some of them being harmed by the surgery. This is the phenomenon of “supply led demand:” once you have many (indeed, too many) cardiac surgeons they will not be idle, they will operate on people where the benefit of the operation does not outweigh the inherent risk..”

If we want to control spiralling health care costs, we must invest for health

The path to healthy life expectancy is a complex one, but health care doesn’t feature that strongly in it, certainly not beyond primary care. 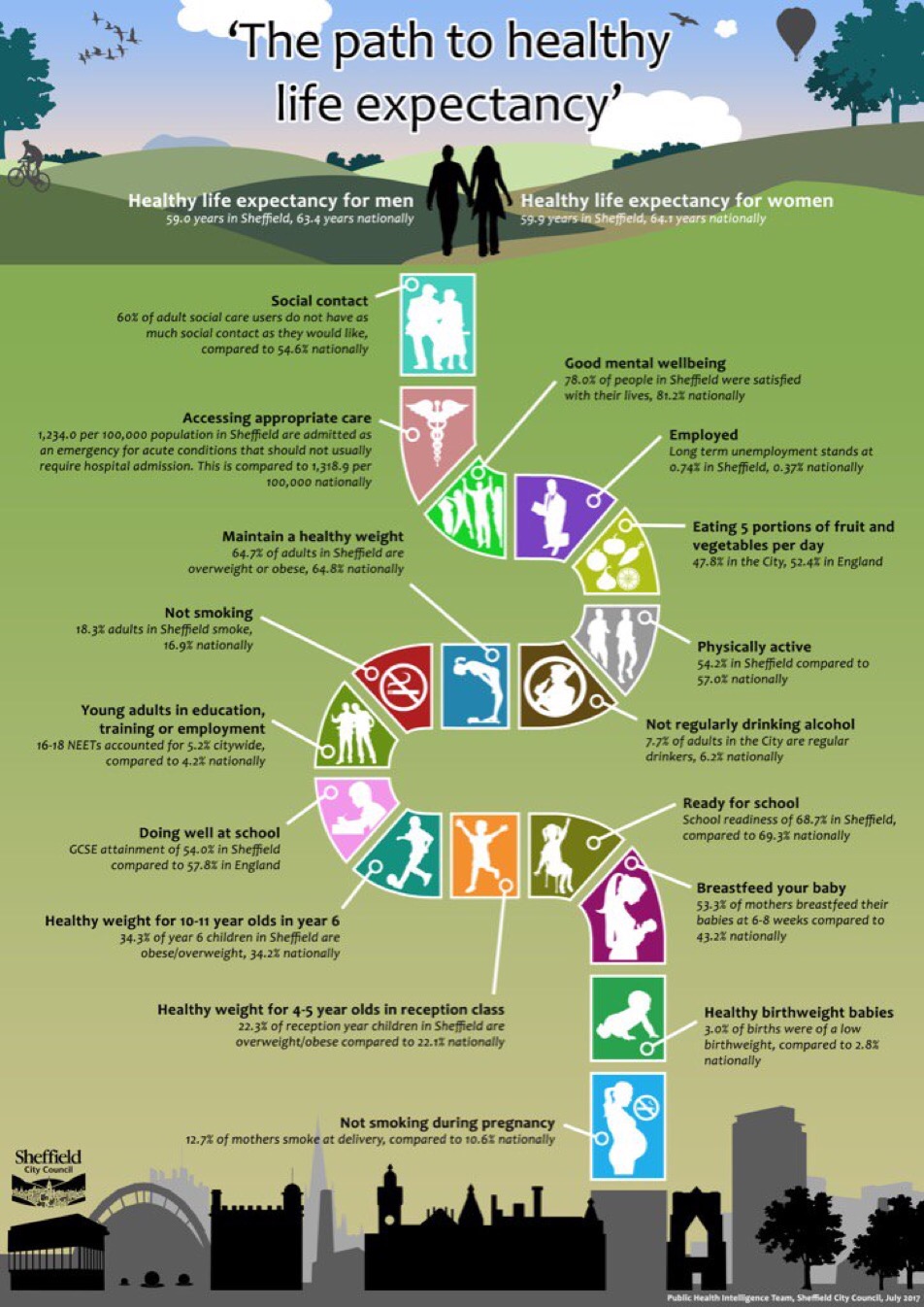 As I have made the case in many previous blogs the problems in health care are accountable to unrealistic expectations, high cost low value technology and disease incidence (and not the ageing population). Turn disease incidence on its head, you have “health”

If we want better healthy life expectancy, we can either choose to invest our resources in health care or things that might lead to health.

Government have stripped local government cupboard bare. We are 7 years into a 4 year austerity programme. Of course it’s the result of a policy choice. The requirement of governments to make those choices must be respected, but there are consequences of those choices we may come to see – note faltering life expectancy worries.
the solution‪ to the conundrum depends whether you want more health or more healthcare. ‬

Of course this is difficult, of course we always need more CT scanners, and diagnostic capacity. These priorities will always be present. If we only ever address the (unending) demands of the present we won’t make the right long term investments.

‪If we want health, we should invest in things that might best lead to health. In the era of boundaryless accountable care, that means using “health” money to invest in non “health” investments.‬
My own solutions

Richard Smith: How to stop the medical arms race? http://blogs.bmj.com/bmj/2011/01/13/richard-smith-how-to-stop-the-medical-arms-race/

Thanks, interesting and clear argument. Great infographics. To even start to do this I think we would need to change the value that is placed on hospitals and CT scanners by our society… how do we change mindsets about health vs healthcare?

Yes
The narrative of “the broken hospital” with pic in front cover of daily mail is potent
Re mindsets – who’s your local dph?

It’s you. I’m in Sheffield. I’m a GP trainee and leadership Fellow working in HEE working on tackling health inequalities in general practice largely through an educational lense. Realising that in care delivery we can only do so much, it needs a societal and cultural change to drive reDistribution of resources (chicken and egg though I suppose). We met briefly a few months ago. Thanks for the blog.

Ahhh yes I remember now!
Oops
Another chat?
Drop me an email on greg.fell@sheffield.gov.uk

Thanks so much for this Greg – Simply put! Shifting the emphasis, the paradigm to what creates health and how to do it. I’m sure engaging with local people in places, neighbourhoods etc. is the way, challenging the conflation of being healthy with NHS (places such as hospitals etc) is part of the task, #it’snotthehospitalstupid.
On a similar and related issue – gang violence and its culture as PH issue?
Bw
S

Gang violence….why not
I always struggle to define boundaries about “public health”
Gang violence has consequences for both individuals and for pops, thus a ph issue…..? Its not something I’ve through too deeply re the specifics tho…

[…] once wondered whether the proportion of health outcomes that are attributable to care mattered. I once thought it didn’t. I thought about it and concluded it […]

Hey
Thanks for sharing the information the best part I liked about the post is it’s unique and contain useful information and images are also unique. Best health care article for more information about health and ayurvedic treatment visit Vedic karma ayurvedic hospital.