Controversial, and I’d expect grief for this one.

I once wondered whether the proportion of health outcomes that are attributable to care mattered. I once thought it didn’t. I thought about it and concluded it did.

Dutton published an excellent article in this space.

“Effect of provincial spending on social services and health care on health outcomes in Canada”. A simple guide to key points is here. I’ll leave you to pore over the methodological geekiness. Yes, there are caveats.

The Key finding is this

A $0.01 increase in social spending per dollar spent on health was associated with a 0.1% decrease in potentially avoidable mortality and a 0.01% increase in life expectancy.

This argument is consistent with other findings. For example

Thorpe noted the rising disease prevalence and new medical treatments account for nearly two-thirds of the rise in spending. To be effective, reforms should focus on health promotion, public health interventions, and the cost-effective use of medical care.

Furthermore, Thorpe notes that the impact of disease prevalence is higher in more deprived populations, again underscoring the need for focused prevention where risk is highest, managing expectations in more affluent populations, and managing the introduction of low value care

Health spending per capita in Canada is continuing to grow. (As we know this is not the case in England). Social spending is relatively flat. 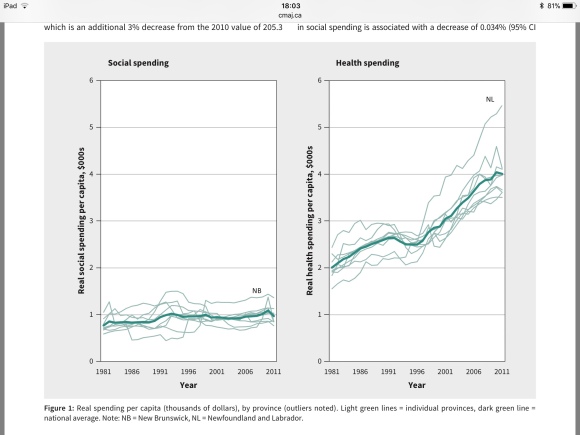 Marginal increases in health care spending in Canada have not been shown to directly improve population health.

Why does this matter

Of course from a macro allocative perspective this matters, and matters a lot. We all know that in many areas of health care we are at or beyond the point of optimality. Added spending on health care is buying less and less gain in health and harm is going up linearly, as is illustrated in Muir Gray’s chart. 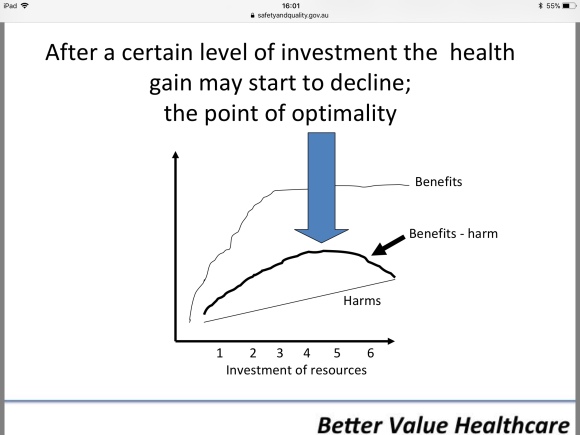 The flat of the curve

Then we get to the tricky business of crowding out. As eloquently set out by The Don (no the other one), and ex BMJ editor Richard Smith greater spending on heath care crowds out investments that bring us massively more “health”. Smith went further with some comments on stopping the medical arms race.

As we (rightly and understandably) argue for more money for the NHS and social care, let’s be clear if we want more health this argument isn’t the optimal strategy. I’d remind you were 7 years into a 4 year austerity programme.

Social programmes have been slashed and decimated all over the country. Particularly where they are needed most. This will have an impact on well being, health and health & social care use for many generations.

As I’ve said before, Unless we have “more health” we might not solve (or even get close to solving) our health cere demand problems etc.

1.      We won’t achieve our goals with more or better health and social care. Its necessary but not sufficient. We need to engineer less need for care. Easier said than done. We over focus on money, and under focus on outcomes.

2.      Harshly one might characterise many parts of the NHS have no incentive to change their business model, indeed the expectation of Parliament and the public, the regulatory system and other structural factors mitigate against change. Even if some people within those organisations see the need to and want to, there is a deep inertia against change, in some instances active resistance to change.

3.      Change is possible. When motivated and incentives to do so, people can do amazing things.

4.      detailed effort is needed a cross the whole landscape to change current model and the shift the demand further upstream. Maybe job of “accountable care” is to sponsor the idea and make sure all committed to executing it. It is not an easy or simple job. Transformation is not ‘doing stuff better’, it is ‘doing better stuff’.

We all want prevention. Few in the health and social care sector are prepared to invest in it.

I shall now go and put my tin hat on.

But remember the basic point –

3 replies on “The flat of the curve. Do you want more health, or health care.”

Congratulations and many thanks for your most recent blog Greg. As you are aware what you’ve written is the essence of an active ageing and by consequence adopting an Age Friendly strategy is about.
I hope that action can be taken across Sheffield involving not only SCC but also the local CCG and VCF with intellectual support from the universities to build a city on the evidence you share.
Saying this for over 20 years myself. Yet this needs leadership and courage from those in formal positions of leadership inSheffield the city . And action not words!

[…] demand on the NHS. Do we want more health, or more health care – the concept of the flat of the curve is important, look up diminishing marginal returns in health economics […]

[…] also written other stuff on this – The flat of the curve. Do you want more health, or health care and How can we measure how much the NHS is contributing to […]